The Soviet Union had just invaded the country of Afghanistan in late 1979.

Afghanistan is located to the North-east of Iran, and the North-west of Pakistan. It has no ocean borders, and is a mountainous country. 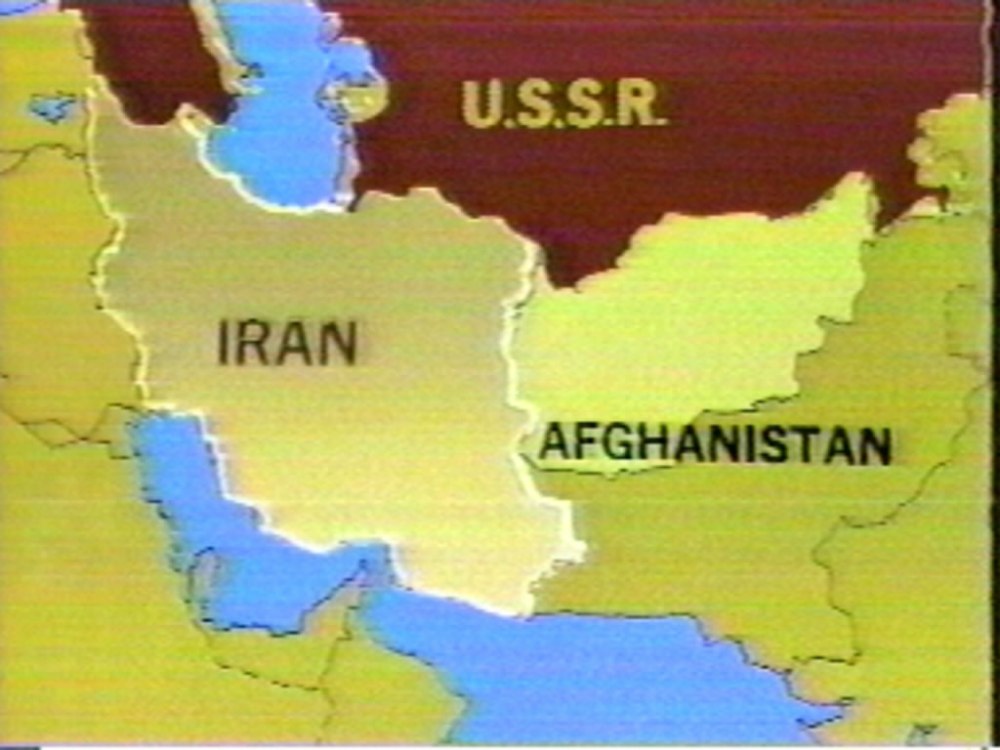 Several hundred aircraft flew in about 5000 troops from the Soviet Union and all their supplies into the city of Kabul. These troops helped support the overthrow of the government.

The Russians had many ethnic minorities that practiced Islam, but a greater majority of the Afghani government and people were Islamic, so, it became a matter of religion to oppose the Soviet invasion.

A Holy War was started against the Soviet Union in Afghanistan, and through the fighting and efforts of the Afghanis, the Soviets never made the people of Afghanistan submit to their rule.

It is only natural to see, that since the Soviets had a combat presence near Iran, any military movement by the United States that approached them had to be watched, and these ships and planes were a part of that observation of us while at sea.

The Soviet Invasion of Afghanistan

Here is a link to the archieved story.

Afghan President Is Ousted and Executed in Kabul Coup, Reportedly With Soviet Help

Special to The New York Times

Koch Picks Sturz to Be Chairman of the City Planning Commission

No Snow, No Profit in the East

Basis of Moslem Fervor Seen as Rejection of Alien Values

Washington, Dec. 27–President Hafizullah Amin of Afghanistan was ousted from power and executed today in a coup reportedly supported by Soviet troops. 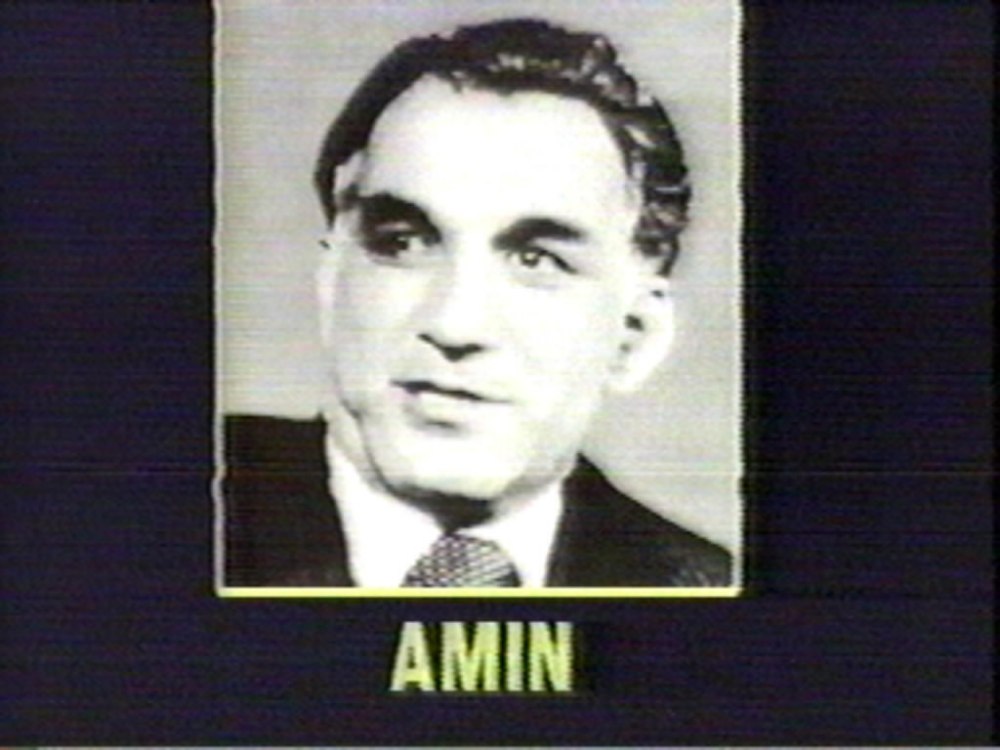 The Afghan radio announced in a broadcast monitored here that Mr. Amin had been sentenced to death at a revolutionary trial for “crimes against the state” and that the sentence had been carried out.

The broadcast said that Babrak Karmal, a former Deputy Prime Minister who had been living in exile in Eastern Europe, was the new President and Secretary General of the ruling People’s Democratic Party. 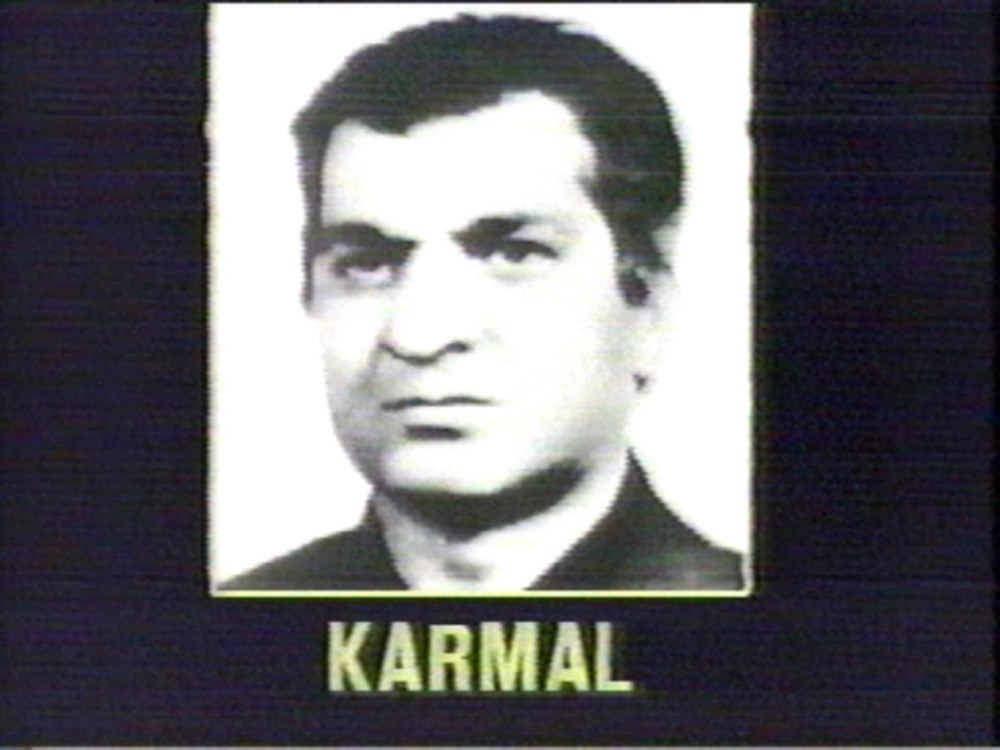 Mr. Amin was the third Afghan President to be toppled in the last 20 months. All three were slain.

The Afghan broadcast was the first authoritative word received in Washington that tended to confirm earlier reports from Teheran and Moscow about the political change in Kabul.

On the surface, the switch seemed to replace one pro-Soviet figure with another. But intelligence analysts said that Mr. Karmal has long been regarded as more to Moscow’s liking than Mr. Amin, who seized power only three months ago.

Earlier, State Department officials said that they received accounts, shortly before noon Washington time, from persons in Kabul that heavy fighting had broken out in the Afghan capital.

The witnesses said that Soviet troops, part of a contingent of more than 6,000 flown to Afghanistan in recent days, had led an assault on the Afghanistan broadcasting center.

Moreover, Soviet combat troops were observed in armored personnel vehicles taken part in battles elsewhere in the capital. One report said there was fighting near the Presidential Palace and that Soviet troops had been seen capturing some Afghans.

Senior Administration officials said the best guess seemed to be that the Soviet Union, which has invested considerable military and economic assistance in Afghanistan, particularly since the takeover in April 1978 by a Marxist Government led by the late Noor Mohammad Taraki, was seeking a more compliant leader to calm the insurgents active in most of the country.

The Soviet Union, with a large Moslem population in Central Asia near or bordering on Afghanistan, has long been concerned about signs of instability in that remote mountainous country, which through the centuries served as a buffer between Russia and the Subcontinent.

United States officials had no official comment, but they said in private that the Russians were probably under extreme pressure to try to end the insurgency in Afghanistan.

President Carter is to discuss the situation in Afghanistan and Iran tomorrow at a National Security Council meeting, which was scheduled before the coup.

The overthrown President, who had been denounced by Afghan insurgents as a symbol of oppression, assumed the Presidency three months ago after a gun battle in the Presidential Palace in which President Taraki was mortally wounded.

Mr. Taraki represented Afghanistan at the recent meeting in Havana of the nations calling themselves nonaligned. On his way home he stopped off in Moscow where he was warmly embraced by Leonid I. Brezhnev, the Soviet leader.

Because of the Brezhnev reception of Mr. Taraki, intelligence analysts here believed that the Soviet Union was unhappy over Mr. Amin’s seizure of power.

Butt if Moscow had doubts about Mr. Amin, it did not reveal them publicly. There were reports in recent weeks, intelligence officials said, that the Russians were cool to Mr. Amin and were looking for someone able to end the civil war.

In the last few weeks, the Russians began to increase their military forces in Afghanistan and along the Afghan border. In the last two days, officials said, more than 200 military transports landed at the Kabul airport with troops and supplies, . In addition, five Soviet divisions have reportedly been deployed along the border with Afghanistan.

Mr. Karmal was the leader of the Parcham branch of the People’s Democratic Party, which was behind the overthrow of President Mohammad Daud in April 1978.

But Mr. Karmal’s group lost power to the wing headed by Mr. Taraki and Mr. Amin. Both groups were pro-Communist, although Mr. Karmal’s wing was regarded as more orthodox and willing to accept Soviet leadership.

Mr. Karmal, during his stay in Czechoslovakia, was reportedly summoned home to face charges of plotting a coup but he stayed on in Eastern Europe, according to State Department officials.

His assumption of power was the first indication to American officials that he had returned to Afghanistan.

There was no question in Washington that the Soviet Union strongly favored Mr. Karmal’s assumption of power.

The Soviet press agency Tass gave favorable attention to Mr. Karmal’s statement: “Today is the breaking of the machine of torture of Amin and his henchmen, wild butchers, usurpers and murderers of tens of thousands of our countrymen, fathers, mothers, brothers, sisters, sons and daughters, children and old people.”

According to Tass, Mr. Karmal said that Mr. Amin and “his stooges” were all “agents of American imperialism.”

The presumption of some officials tonight was that Tass would only have issued the Karmal statement if it had certain word from Kabul that Mr. Amin had been toppled.

The Soviet Union has seemed deeply troubled by the inability of either the Taraki or Amin governments to put down the rebellions in Afghanistan, which have been largely tribal but also militantly anti-Communist.

Not only have the Russians supplied the Kabul authorities with military equipment and advisers but they have also sent more than 6,000 combat troops to augment the nearly 4,000 military advisers.

This was the first time that organized troop units were sent outside the Soviet bloc or Cuba since World War II, and the move underscored Moscow’s concern.

Afghanistan, which borders on Soviet Turkmenia, has always had close ties to the Soviet Union. But until recently the Russians seemed content to let the Afghans follow an ostensibly neutral policy.

This happened about a month after our hostages were taken. This meant there was a huge soviet fleet off the coast of the neighboring countries that had an ocean near Afghanistan: Pakistan, India, and Iran. We saw some of these ships in the Arabian Sea, and here are some shots of those ships.

This is the Soviet AGI that followed us as soon as we left Hawaii. I literally followed us the entire time at sea. These ships would intercept our radio transmissions, pick up
our trash to see what was in it that would provide information about us, and also report our position to the Soviet Union so they knew where we were at all times in
case of war. 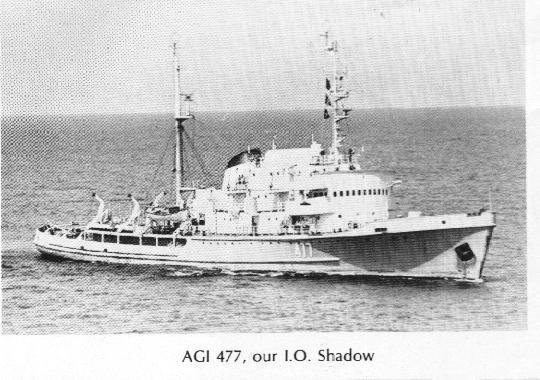 Along with our own ships, we had Russian Ships in the Arabian Sea at the same time. This photo proves there was much more than ships, but Russian bombers, too. This was the famous ‘Bear Bomber’, a ‘modern’ propeller driven bomber; 4 engines but with 8 counter-rotating propellers. It was a big plane, almost the size of a Boeing 707, or at least it looked like it from a distance. 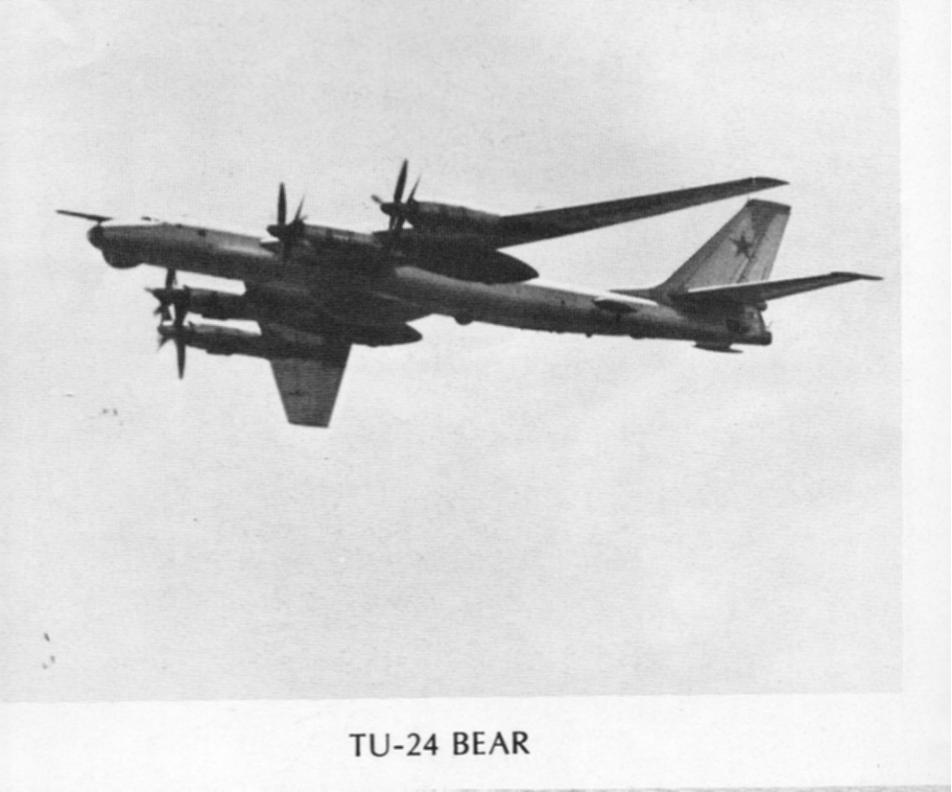 Here is another shot, (with a better camera than my own), of the KA-25 Hormone, the anti-submarine helicopter. One interesting thing about the day he buzzed our ship, is that when we all responded the way we did, the Pilot sat and hovered and took pictures. If you look real hard, you can see the pilots leg hanging out the aircraft. 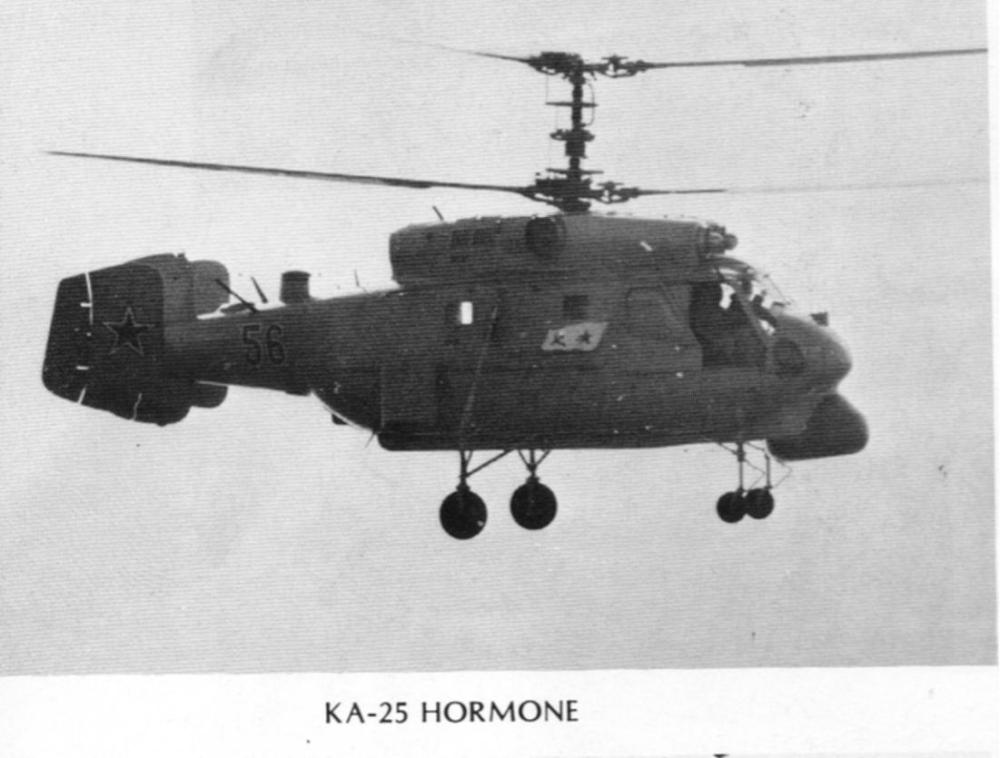 This shot is of a long range patrol plane from the Soviet Union, an IL-38 ‘May’. It is similar to our P-3 ‘Orion’ aircraft. I did not personally see this one, but this photo is from the official squadron photographs taken by HMM-165 cameramen.

This is a Russian Destroyer, a ‘Kresta’ class ship. The Russians may not have had a Navy like the US, but the ships they did have were awesome ships. One of the things the Russians did, was to fill the decks with weapons, all kinds. If there was room on the deck for anything, it was a cannon or a missle launcher. It was basically a suicide ship, filled with guns that had to be used and packed with ammunition.

Here is another type of Russian Destroyer, a ‘Krivak’ class destroyer. It was a fearsome looking ship, but then again, we could have taken it.

This is one of the Marine interpreters on the flight deck of the Okinawa during the field day we had off Iran. The ship gave us hot dogs and hamburgers and free sodas. We even tried to catch a shark off the port side of the ship by hanging a side of beef in the water! We got one to look but no nibbles.

This sign reads “We Drink Russian Blood”. That small ship in the background is the Russian trawler that followed us around and spied on us the entire time. We held it up for them to read.